Supermarket was a Spanish game show based on the American Supermarket Sweep TV show format. Hosted by Enrique Simon, the show appeared on the channel Antena 3 in 1992.

Supermarket made its debut February 24, 1992. Antena 3 recorded the program on a one thousand meter set simulating a supermarket located in a warehouse in the outskirts of Madrid.

As in its American counterpart, there are three teams and each team starts the game with an automatic one minute and thirty seconds (1:30). Players in this version follow the same format as the American version, as well. The Question Round is divided into three parts. In the first two parts, players answer questions about products found in the grocery store and the third part is the Round Robin. Each correct answer was worth 10 seconds. In games where all three players select the correct answer, 20 seconds is added to each team's clocks.

As the show aired every day, variety in the type of games played was a must. Because of this several games were played, but each generally utilized the following objectives:

The rules of the Big Sweep were the same. Players could only grab of any item and would be penalized for knocking over products and not picking them back up. If a player fills up his/her cart they could run back to the checkouts and receive a fresh one. The player with the highest total of products in their cart goes on to play the Bonus Sweep.

The Bonus Sweep is also played the same way. The winning team is given 60 seconds to find three products hidden in the market. The first clue leads to a product that possesses a second clue. Each of the first two products awarded 150,000 pesetas. If a player finds the third product before time runs out, they must run back to the checkout stand where they are awarded the money. The clues are delivered in various formats. Some clues were two line rhymes describing the product, which lacked the brand name at the end of the rhyme. Other clues used puns on the name of the product. Sometimes, the cluess led to a movie, a fruit or vegetable in its section or a flower in a special kiosk located in front of the supermarket that was used only during this phase. 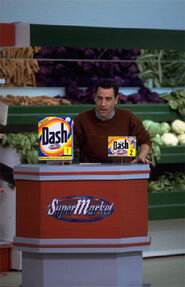 Retrieved from "https://supermarketsweep.fandom.com/wiki/Supermarket_(Spain)?oldid=5847"
Community content is available under CC-BY-SA unless otherwise noted.